Lemond Cransten has a few bones to pick with me after I admonished CEO Ron Johnson (R- Dimwitistan) for not publicly calling out Republican presidential nominee Donald Trump after he accused U.S. veterans of stealing tax dollars meant to rebuild Iraq.

The other day as I checked my mail, I found nested envelopes with only a name (that I'm betting isn't the person's real name) as a point of contact. 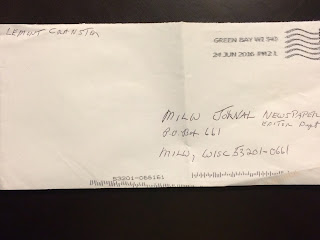 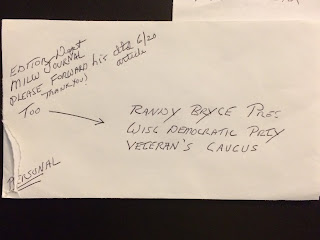 As you can see, the letter is postmarked from Green Bay. Obviously, "Mr. Cransten" must get a good deal of ribbing being a Chicago Bear fan living in Titletown. (it would explain the actual letter)
I am guessing that he also is quite miserable from having Trump as his Party's nominee. (with good reason) 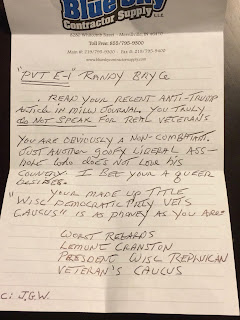 Let's start at the beginning.
He demoted me. "PVT E-1" is a recruit. The man has power. When I ETSed with an Honorable Discharge in 1986, I was paid as an E-4, but, wore sergeant stripes due to what was known as an "AJ (Acting Jack) promotion".

He then went on to inform me that I don't speak for "real veterans". Interesting. I was elected just over one year ago to be chair for the DPW - Veteran Caucus. Perhaps Mr. Cransten only thinks that Republicans can be veterans? What I find interesting is that I really look forward to any activities that I take part in with regard to veteran issues as it's one place where veterans of all political persuasions can find common ground. It's why I jumped at the chance to be a part of the Wisconsin Veterans Chamber of Commerce. At our kickoff event, there was a very pro-RTW4L Republican State Representative who I made a beeline for to thank for attending. Veteran issues are a chance to unite. They provide the ability to open doors and minds in order to at least get us to talk to people who in this very divided State would never do so.

At events where there are pro-Labor and pro-Tea Party supporters, I always make it a point to seek out those opposed to Labor (an issue very near to my heart) who wear evidence of prior Service. (hat, or t-shirt) I thank them for Serving. I make sure that they are aware that it takes non-political soldiers to perform tasks that allow us to make our voices heard once we leave active duty.

I shake their hand with sincerity.

I am called a "non-combatant". Central America in the mid-80s was never defined as being an active duty war zone. I do recall digging out a bullet that magically appeared in a sandbag not more than 3 feet from where my head was located after hearing a pop followed by sand spilling out.
Let's call Mr. Cransten technically correct as I did not receive an Expeditionary medal, yet, always had a loaded weapon with me. When we travelled to certain parts of certain countries, it was mandatory to carry a concealed M1911A1. (.45 pistol) Rounds were fired.

He goes on to call me a "gooFy LiberaL ASS-hole".
Okay. Points for Lemont here. Points taken.

However further along in the sentence he accuses me of "not loving my country."
This is where the center ring of Lemont's "circus of ignorance" gets the attention of every spotlight in the house, and, it only gets better from this point on.

Anyone who Served obviously loves their country. If he had truly read what was written in the op-ed, he would know that the main reason it was written was to call out Trump's accusation for accusing other veterans of stealing something that did not belong to them.

There are no political parties in a foxhole. Ass-u-me (ing) that Mr. Cransten is a veteran, Trump accused men just like him of being a thief. I think that's all that needs to be mentioned about where Trump's (and Ron Johnson's) followers heads' are located.

Added to the brilliant letter is "I Bet your (sic) a queer besiDes"
Dude. *you're
And, sorry, but if this was your way of asking me out on a date, I am heterosexual. I do have gay friends. I cherish their friendship very very much. Every one of them makes my life better for knowing them. How Republican of you to try to use that as a means to insult me.

Lastly, he goes on to accuse me of fabricating titles and organizations while signing his name as having a fictional position in a nonexistent group.

Mr. Cransten - please reread the op ed. You confused two separate groups into one. Links are provided in this piece to help you locate them.

Thank you for the laugh. It really did make my day. I also appreciate your efforts with choosing the stationary that I am sure you reserve for any letters that you get enough nerve to communicate with that don't involve crayons.

As you seem to exhibit some initiative by reaching out to me, yet, lacking in the courage that most veterans have by providing a means to reply, please consider this public blog post my attempt to respond to your sophisticated thoughts.

P.S. I seem to have repeatedly misspelled your last name. I doubt you were even aware until I just brought it to your attention.  I hope you have a fantastic day.
Posted by Chicago progressive at 5:32 PM