A union guy and a member of the DNC executive committee walk into a bar....

Well, we didn't actually walk into a bar. By the headline, you may be expecting something to make you laugh. Consider your attention "grabbed".

The union guy would be me - a dad who currently is part of a crew building the latest skyscraper addition to the city of Milwaukee's rapidly changing skyline. The DNC executive committee member is Jason Rae - a political dynamo who is creating an incredible amount of positive change as well.

Did I mention that Jason is not "just" a member of the Democratic National Committee but part of the executive committee? That's huge. ("YUGE" even) Wisconsin has more than just a little say with what direction the DNC goes. We currently have a voice within leadership.

I read quite a bit about people being dissatisfied with the way things currently are going. I know for a fact that Jason is aware of this as well. He's the one who shared this with me:

Above is a link where you can share testimony regarding the DNC platform. It's not just a "token" attempt. You can submit written, recorded testimony, or even arrange to testify in person. (after having my own testimony cut off after waiting for an entire day by Wisconsin Republicans during their "ambush legislating" of the RTW4L bill - I can "testify" that I appreciate others who are willing to hear what I have to say)

I'm not going to make this into an extremely long post as I'm still getting ready to drive to the WisDems convention in Green Bay, but, I thought that there were a few things that people should be aware of.

One story that I'm pretty sure nobody knows about is how Jason Rae stood up for a veteran group that I've become a part of - The Wisconsin Veterans Chamber of Commerce. In our infancy, we were blindsided by that ever reliable source of misinformation - "MediaTrackers". They put out a "hit piece". It caught the attention of WMC. (yes, that WMC - Wisconsin Manufacturers and Commerce)
Initially they bought what was written about us. It was Jason who made the noise that got them to take us for what we are - an entity without political leaning who are solely committed to helping veterans either get a job, or, create jobs. (thank you Jason!) Anyone who stands up to WMC and can make them listen has a very special voice.

Staying on the subject of "chamber of commerce", most people know that Jason is the executive director for the Wisconsin LGBT Chamber of Commerce. He has taken that group to receive some incredible national recognition.

Not too long ago, working on construction job sites was how I spent the majority of my time. Many reading this are aware of "the change" that took place in me following the extremist incursion of Wisconsin following the election that allowed Scott Walker to turn our state into a Banana Republic. (subject for innumerable future posts)

When I went through my transformation, I looked for help. We needed all of the allies that we could get in order to mount a counteroffensive. Jason was there. If anyone had a question, Jason was one of "thee people" to ask. Not only could you ask, but, you'd get an answer.

I don't consider myself to be anything "special". I do what I can. I always do what I feel is the correct thing to do. Always. I consider it a privilege to be part of an incredible team that is fighting to take back Wisconsin and make it into something that we recognize. I do put my "all" into it. It causes me to lose sleep. It causes me to miss work. (luckily belonging to a union - it is understood when I take off)

At the heart of what makes me who I am is just a guy who busts his backside in order to provide a better world for his child. I appreciate the people in this world who spend their time making it a better world.

Jason Rae is one of those people. I completely trust him. Complete trust doesn't come easy these days, but, he has it. It has been earned. He's had my back, and, I will watch his.

Jason could have asked anybody in the entire state of Wisconsin to nominate him this upcoming Saturday morning in his bid to continue serving on the DNC, and, it would have been a huge honor no matter who was asked. Huge. (YUGE even) (check out this huge list of supporters)

He asked some guy that really isn't special in any measurable sense that sometimes limps to his car after work carrying a lunchbox who just cares about making things better.

The only hesitation in accepting was allowing it to sink in that the conversation was taking place. Not just because it was me being asked, but, the situation of where we were. An everyday ironworker had been asked to nominate a leader of the DNC to be reelected.

For a working guy, this tells me all that I need to know about who is going to stand up for people like me. For us. This at a time when Unions are under attack and fighting just to exist. 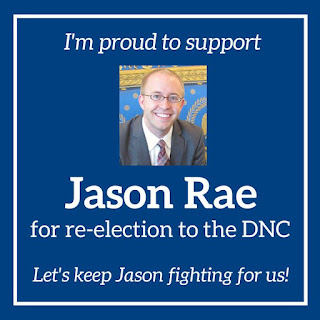 ~triumpus
Posted by Chicago progressive at 9:12 AM